Nearly a decade ago, I was watching an episode of Trading Spaces where one of the designers used various floral photographs to create a photo montage on a wall.  I loved it.  That's just all there was to it!  I had to have one.  Years later, I took these hibiscus pictures while my husband and I were on our honeymoon in the Bahamas.  I printed and framed them shortly after we returned home and they have added a pop of color to our chocolate brown accent bedroom wall for the last four years. 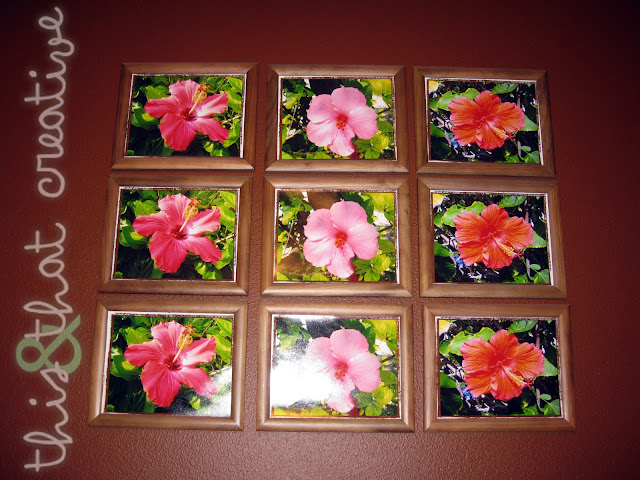 Even though I still totally love the hibiscus flowers, I felt it was time for something a bit different more gender-neutral.  I came up with this: 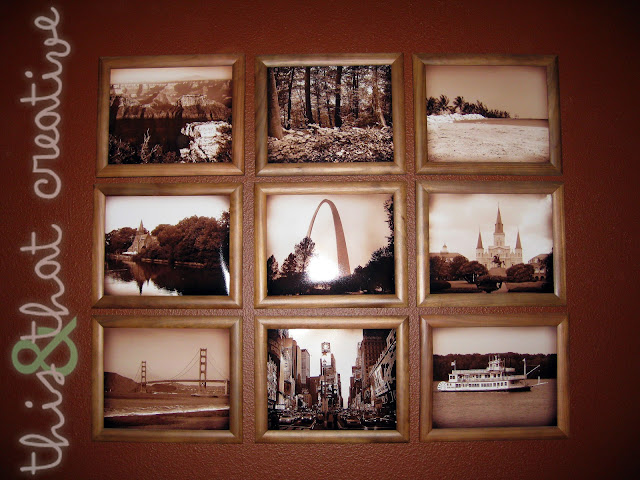 My husband and I LOVE to travel.  I take loads of pictures constantly, so I had many to choose from!  I finally decided on a montage of some of my favorite trips (admittedly, some were without my husband).  I will be the first to admit that I did have to apply some "master PhotoShop skills" as I didn't particularly enjoy the random strangers who also appeared in my pictures (minus the Times Square photo--NYC just isn't the same without loads of people...and taxis).  But hey, you'd never know that my Golden Gate Bridge shot and Bahamas Beach shot were previously littered with unnamed strangers!  I printed these with a sepia tone because, even though the pictures are more beautiful in color, I didn't want the wall to be TOO busy.  I love how it turned out!
Posted by *Aliese* Labels: Home Design/Decor, Miscellaneous, Photography